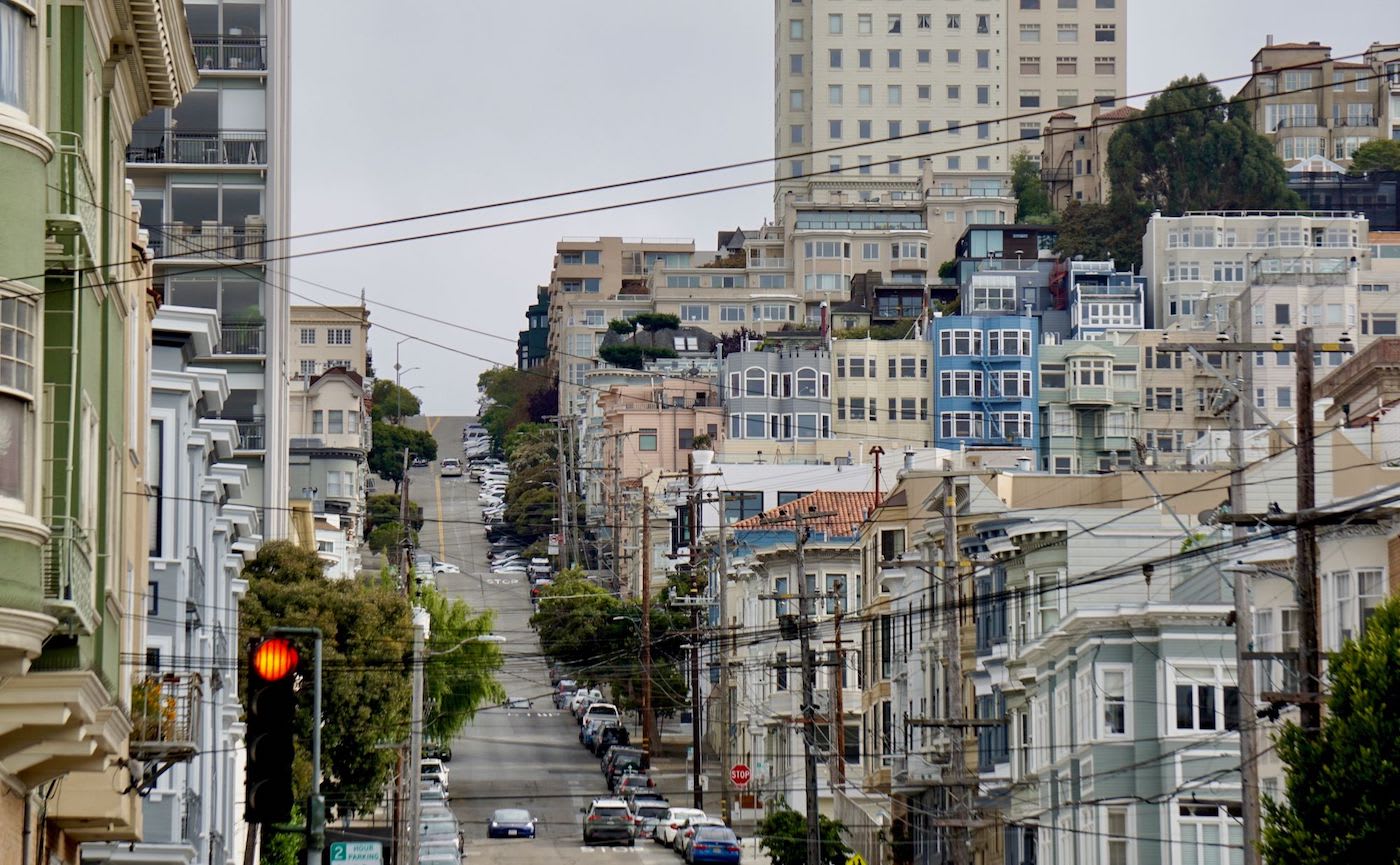 The first time I visited San Francisco was for Dead & Company's 2019 New Year's Eve run at the tail end of 2019.  I had no idea what I was in for or that I'd be living in the same area 2 and a half years later.  Life is wild.

There seemed to be so many unique things about San Francisco: the hilly and brutal landscape, the cable cars, the Golden Gate Bridge the urban density (2nd most in the country), Chinatown (the largest in the world, outside of China of course) – not to mention the city's history and importance on both a state and global level.  And this is just San Francisco itself!

I'll probably mention her again but I have to give credit to my fiancé for being the true catalyst to getting us to move out to the Bay Area.  I know we both loved Indianapolis but it was time to try something new for a bit.  A silver lining of COVID was that my job move fully remote and she was able to get a fully remote job based out of San Francisco.

We were very selective in where we wanted to move to, and that was Marin County, just north of San Francisco.  Considered the Bay Area's best region for outdoor activities among other things, Marin is not only relatively sparsely populated with beautiful outdoor spaces, but most of the county is no more than a 20-minute drive or 30-minute ferry ride to San Francisco.  It's shocking to me that somewhere like this exists.  The specific area of  Marin County we moved to is the county's seat and most populous city, San Rafael.

While each of Marin's cities has its own characteristics and charm, the county as a whole also carries a distinct and unique personality that reaches all citizens and visitors of the Bay Area and beyond.  Marin is known for being one of the most magical, beautiful, and often remote parts of the Bay Area.  The counterculture quickly started shifting here in the early '70s (I will forever be grateful for David Gans' and Blair Jackson's book, This Is All a Dream We Dreamed, for showing me how much Marin meant to the Dead) and things like the organic food movement and mountain biking were quite literally conceived here in Marin.

It's nothing but a blessing to have the opportunity to move to the part of the country where the Dead were formed and lived – the spirit still permeating the county today.  Damn near every night of the week there's a Dead show going on somewhere in Marin.  Be it at Sweetwater Music Hall, one of the Bay Area's best venues, or the Papermill Creek Saloon, a cash-only dive bar located in Forest Knolls (Jerry died less than a half-mile from here).  After all, the Dead spent most of their time based here in San Rafael, the band's office about a mile from where I live now.  Bobby and Phil both also live in nearby Marin towns Mill Valley and Ross.  Bill Graham introduces the band as "from the Marin Counties" (not sure if that incorrect reference to "counties" is with intent) at the beginning of 12/31/76 in Daly City.

I've also grown very fond of water-based travel via the Golden Gate Ferry service.  As somewhat of a self-described public transit nerd (especially rail), I am finding so much joy in taking the ferry from Larkspur into San Francisco a few times a month for various reasons.  I am particularly looking forward to baseball season to take the Ferry directly to Oracle Park for Giants games.

Marin isn't all authentic and amazing though, one could argue far from it.  Marin County is the fifth wealthiest county in the country, and also one of the whitest.  The amount of rich, bleach-blonde moms driving Range Rovers and 16-year-olds driving BMWs and Mercedes is often a little cringey.  San Francisco's counterculture moved here in the early '70s?

I think people love to blame tech for a skyrocketing increase in property value and cost of living in the Bay Area, which is of course partly true, but I think it's more just an inherently the magic of The Bay.  I've lived here less than a year but I'm starting to understand why the high cost of living is tolerated.

Even though we spent a week in Marin prior to moving here I am just now starting to grasp how fortunate we are to live in a place with such beautiful and well-preserved outdoor and green space.

As alluded to earlier, mountain biking was quite literally invented on Mt. Tamalpais, perhaps Marin's most iconic feature which is viewable from all around the North Bay, San Francisco, and parts of the East Bay.

Mt. Tamalpais (colloquially referred to by everyone as Mt. Tam) is one of Marin's best places to be outdoors and absorb centuries of both spiritual and communal importance.  From the Coast Miwok and San Francisco counterculture to providing water, joy,  and financial livelihood to thousands over hundreds of years, Mt. Tam is no doubt one of the most reaffirming reasons that I am proud to live in Marin.

Our county's greenspaces don't stop with Mt. Tam – far from it.  The views in West Marin are not only some of the best in California but the best in the country.  While the county as a whole is beautiful the true inherent and untouched magic of Marin starts to peek out once you get a little west of Fairfax. Here, the county truly begins to open up as preserved spaces get wide-open and residential areas begin to shrink.  Heading all the way west leads to Pacific seashore that's second-to-none along the entire coast, my favorite being section being Point Reyes, one of the true historically important sites in all of California.

The California redwood (Sequoia sempervirens) is something that I've really come to love and be proud of.  These may be the only things that can rival the commanding and towering feeling the Golden Gate Bridge gives me every time I have the pleasure of going across.

Now I know redwoods are by no means Marin specific (perhaps the best redwood viewing is even further north in California near Humboldt) but the duality of living adjacent to the second-most densely populated city in the country, while also being surrounded by some of nature's most imposing and ancient creations is something I genuinely cherish about living where I do.  Without a doubt, Marin's most iconic way to experience California's redwoods is at Muir Woods.

While the historical importance of Muir Woods and especially its namesake, John Muir, can quite literally not be understated, Muir Woods is often busy and over visited.  It's worth going once, but after that, the majesty of California's redwoods can be experienced with fewer people elsewhere via hiking and biking.  While not in the woods themselves, heading a little Southwest of Muir Woods eventually leads to both Muir Beach and Tennessee Beach, both stunning views of the Pacific and quite memorable in their own right.

I've had to pleasure of finding the joys of cycling for almost 10 years now, but it's something entirely different out here.  Due to COVID supply chain issues, I had to travel all the way down to LA to scoop up the specific color and size of Surly's Midnight Special I wanted – well worth the 8 hours each way.  While traditional mountain biking may be king in Marin, road and gravel riding still have their place here.  There's nothing quite like having a "we're not in Kansas anymore" moment riding some fire road at 3 pm on a random Wednesday.

I chose my particular bike as it's a gravel bike capable of taking on not only pavement but also excelling at dirt trails, light mountain biking trails, and of course its namesake, gravel.  People drive hours to come bike in places I can ride to in 30 minutes or less from my front door.  That's why our rent is 3-fucking-thousand dollars a month, and worth every penny.

As I'm making an attempt to write more to this blog and document certain things that happen in life, I really want to put some words to paper for what we've been enjoying since moving to San Rafael.  Again, I have to give most of the credit to my fiancé who I can't imagine living out here without.  She was the one that pushed us to make the jump and I will be forever grateful for that.  She's the best.

Will we live out here forever?  My gut says no for a few big reasons – the main being is that the type of living arrangement we could potentially afford to purchase here in the next 5 or so years pales in what we could potentially buy elsewhere.  While the beauty and experience of not just Marin, but San Francisco and the Bay Area as a whole cannot be replicated anywhere else, the balance of owning an actual home with property somewhere like Asheville, NC or Burlington, VT is an achievable short term goal.  I've yet to see a 3 bedroom home for under $800k anywhere in Marin.  Yes, it's that fucked up.

Maybe further north in Santa Rosa or even further in Eureka (now we are getting into a little of the methy parts of the state) would be possible, but is that even really worth it?  So much of what I love about living here is riding my bike from home to Mt. Tam, China Camp, San Francisco, and others.  Or the 5-minute drive to the ferry terminal to go to San Francisco on a whim.  Or seeing the Golden Gate Bridge a few times a week.

I'm not saying I don't think I could potentially learn to love other parts of California, but this assumingly 3-5 year chapter of my life in the Bay seems tempting to wrap up neatly and take as a memory to relish and relive elsewhere when it's all said and done.  NFA.

Puffco Proxy Review – Who is it For?